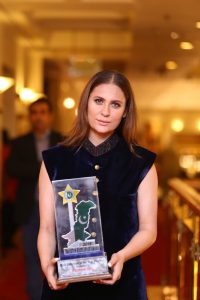 The evening began by welcoming guests at the red carpet, recitation of Holy Quran by Qari Mumtaz,
followed by recitation of naath by Asad Ayub. The National Anthem sung by Jamshed Sabri Brothers
came next. To entertain the audience a song especially prepared for the awards by Irfan Sumoo was
performed by the same group and Farzana Mirza.

Addressing the audience, Chairman of Pakistan Excellence Award Abdul Hameed Bhutto said, “Pakistan
Excellence Awards pays tribute to personalities that have served the country well with their talent and
dedication. These are the second awards, held annually, and we hope to establish their
credibility and consistency in the years to come by not making them overly ambitious, but
executing them honourably. We should all come together to encourage such programmes so that
more and more people are motivated to excel in their work.“

One of the chief patrons of Pakistan Excellence Award, chairman Abdullah Builders, Muhammad Iqbal
Qureshi said, “Pakistan is the blessing of Allah, and it is our responsibility to develop, build, and protect
it. Pakistan Excellence Awards is playing a pivotal role in encouraging the talented people of our country
to work even harder and prove themselves. “

Sultana Siddiqui, patron Pakistan Excellence Awards and president HUM Network was the keynote
speaker and she spoke on the value of acknowledgement and appreciated the efforts of the organizing
committee for launching this great initiative. Guest of Honour, minister of culture, tourism and
education, government of Sindh, Sardar Shah reinforced the need for everyone to put their best foot
forward and make Pakistan a country that can hold her head high internationally as well.
The first awards were in the categories of Lifetime Achievement, Business, Folk Singer, Best Host of the
Year, and Rising Star of the Year male and female. The awards went to Anwar Maqsood, Arif Jeeva,
Shazia Khushk, Nusrat Harris, Raafay Israr and Anam Tanveer respectively.

Sohrab Soomro and Ali Gul Mallah took the stage for comedy chit-chat to entertain the audience, after
which Farzana Mirza sang a few songs.

The evening continued with a dynamic performance by Pakistan’s rising talent in music, Raafay Israr who
sung a catchy number that appealed to the audience.
Best Comedy Show award was given out to the team of HUM Sab Umeed Say Hain. Best Supporting
Actor male and female went to Ali Kazmi and Kubra Khan respectively. Best Actor award male was
presented to Osman Khalid Butt. Best play was also a tie and went to Baaghi and Alif Allah Aur Insaan.
At the end of the evening, delicious dinner was served and an enjoyable music performance by band
Raeth and Farzana Mirza. All in all it was a successful event that concluded with a good note looking
forward to more such awards to take place and honor the known personalities that have served our
industry.

The PR of the event was handled by STARLINKS PR & Events.