Load Wedding Has Proved That It Is “Bari EID Ki Bari Film”! 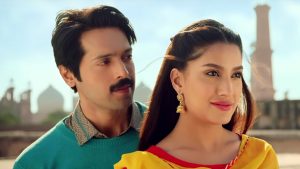 Illustrating its quirky name, it was anticipated that it might have jabs at the electricity crises that our country goes through (Pun Intended here ;)) but the film in general is about some complex issues that loads the families and marks delays in marriages. Directed by the brilliant director Nabeel Qureshi and produced by the exceptional producers Fizza Ali Meerza and Mehdi Ali, Load Wedding is a must watch this season!

Fahad Mustafa (Played a shy-in-love Raja in Film) has proven himself an exceptional actor and dancer in the film, pulling off a desi image so effortlessly that anyone else could not. He still managed to look handsome in those garish jumpers and old fashioned sneakers.

On the other hand, Mehwish Hayat (a Punjabi Kuri Meeru in Film) has pulled off a total Punjab di Kuri look so elegantly that audience couldn’t take eyes off of her, her character in the film has her own strengths and vulnerabilities, that makes Meeru’s character special in an unique way.

The innocent love story between Raja and Meeru put smile on faces, both the actors excelled in their roles from the control over Punjabi accents to their amazing dance performances in colorful Punjabi ensembles. Rana Kamran’s outstanding cinematography exhibits the core of rural Punjab and Shani Arshad’s music and background score enhance the genuineness of Raja and Meeru’s love story.

But as every story must have a villainy twist and characters, Raja’s elder sister Baby Baji (played by Faiza Hassan) and her mother (played by Samina Ahmed) are constraint to the love story of Raja and Meeru. Baby Baji is getting old for marriage waiting for rishta, so how can Raja get married right? *Sob*

Hitting the sensitive issue with perfect humor is what Filmwala Pictures are known for! While the first half is all lovey-dovey, the rom-com becomes all thoughtful in second half, giving the audience something to muse after their exit from the theatre.

The Film has beautifully captured all these solemn society issues in a way that holds its viewers to their hearts, in a not-so-serious way.  All in all, Load Wedding might not have bells and whistles of other Budget competitive films, it still ascertains to be “Bari Eid ki Bari Film” with perfect amalgamation of love, comedy, dance numbers and a lesson!