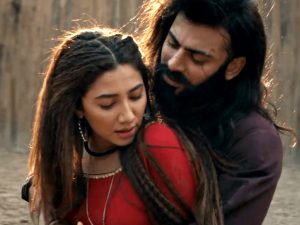 The first look of Fawad Khan, Hamza Ali Abbasi and Mahira Khan starrer much anticipated ‘The Legend of Maula Jatt 2’ dropped last night and it has brought the wow element on-screen.

The first official trailer of the film gives the glimpse at the stellar cast Fawad, Mahira, Humaima Malick and Hamza Ali Abbasi, Ali Azmat, Gohar Rasheed, Shafqat Cheema among others. The trailer has been trending on social media since last night and is receiving a massive response from the audience.

The 2-minute 23-second clip, which has no dialogue except for the one chilling holler ‘Maula!’, has a narration by Kamran Lashari introducing us to the legend of Maula Jatt and to the main characters of this epic saga.

Hamza is playing the role of Noori Natt, Maula’s (Fawad) arch nemesis and as the narrator explains, he and Maula will indulge in the biggest rivalry ever seen in Pakistani cinema. Mahira will play Fawad’s love interest in the movie.

The reaction is massive, with many of the Pakistani industry people as well as Bollywood ace director Karan Johar has praised the first look of Fawad Khan as ‘Maula Jatt’.

Watch the first look trailer of "The Legend of Maula Jatt"

While fans are going crazy about how the trailer has raised the standard of Pakistani cinema, many are comparing it ‘Game of Thrones’ and ‘Gladiator’, due to the look of the main characters.

Fawad this looks amazing!!!! Congratulations and am sure it will be a massive success!!! 💪😎😎❤️🔥 https://t.co/TOHf0uOxJn

The film has been directed by Bilal Lashari of ‘Waar’ fame and it will hit theatres on Eidul Fitr next year.

Luxury Hotel Chains: Get The Best Value For The Price You’re Paying!